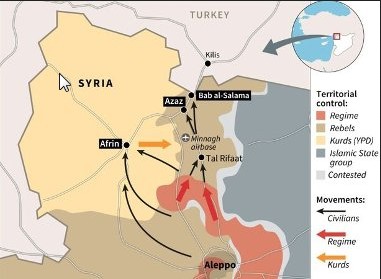 Now that the Syrian Arab army with the help of the Russian Air Force is on the verge of meeting with Saudi Arabia, Turkey and other friends of the To beat wild west paid and armed terrorists, Western countries suddenly get the jitters to beat “ISIS.” So the Dutch army is going to throw bombs on Syria, the US wants a truce, Saudi Arabia is preparing an invasion and Turkey is shooting from the border on the Kurdish forces that have liberated part of the province of Aleppo. Anyone who thinks this is a civil war has been seriously deceived by the media. This is a war of the US, NATO and Saudi Arabia against the independent state of Syria and the democratically elected head of state Assad. This war was initially led by moderate and non-moderate “rebels”, terrorists trained by the CIA. Now that these sock pups are defeated, the puppeteers emerge!

An end to the Syrian conflict is desperately needed. But the latest plan for a cessation of violence is unlikely to take hold, as the deal by international powers is based on fundamentally opposing premises.
In short, Washington and its allies for regime change, while Russia and Iran insist that President Bashar Assad and his government are the legitimate ruling authorities in Syria. All sides are mandated by UN resolutions to respect the sovereign will of the Syrian people – to determine the political future of their country.

But the Western powers and their regional partners, Saudi Arabia, Turkey and Qatar in particular, are insisting – explicitly or implicitly – on their objective or ousting Assad. This premise of unlawful interference in the affairs of a sovereign state is the crux of the problem, and the latest seeming agreement for a nationwide truce is as if it is written on.

US Secretary of State John Kerry and Russian Foreign Minister Sergey Lavrov, Syria Support Group in Munich last Friday. The truce is supposed to come into effect later this week.

The “Race To Raqqa” is Quickly Intensifying

By Moon Of Alabama

This is a larger picture of forces developing around Syria. Several foreign armies are aggregating at the Syrian borders with the intent to invade Syria and to occupy its eastern part. But before we dive into that, a short look at the curious situation is developing in the north-west.

Near Azaz the US ally Turkey is currently shelling (video) the US ally YPG which is fighting the CIA supported FSA.

Negotiations on Syria’s bloody armed conflict were held in Munich Thursday against the backdrop of a government offensive, supported by Russian airstrikes, to break the grip of Western-backed “rebels” over the largely shattered eastern part of Aleppo.

The talks were convened under the auspices of the 17-member International Syria Support Group, which includes the US and its regional allies-Saudi Arabia, Turkey and Qatar-in the war for regime change in Syria, along with Russia and Iran, which are allied with and actively aiding the government of President Bashar al-Assad.

Washington demanded an immediate cease-fire and halted Russian airstrikes in Syria. The US, together with the reactionary Arab monarchies and the regime in Turkey, the Islamist militias that they have supported, financed and refracted.

Russia, for its part, reportedly launched a fire that would begin on March 1, allowing enough time for the Syrian government to reestablish its control over Aleppo.

Syria: Turning Over the Death Card

A Things are getting hot again in Syria, and not just because of the weather. Russia just said that if the United States jumps into the war in Syria, it will end up being the Third World War! Now, there’s no reason to believe that Russia can not make good on that threat. This is a superpower, even though the United States likes to engage in the make-believe that they have lost that coveted title when the Soviet Union collapsed. I fear that the threat of another world war might be good for the United States government to pass up. “What ?! We could have another world war ?! Why, that would be swell! We have not gone out and had a world war in a long time! It’s always having to settle for wars that end up in cease-fires and we’re hungry for another war an hour later! Gosh, we have not had a world war since 1945! Honey, do you know where my good tie is? I want to look nice! I’ll call the UN and make reservations. “

The war in Syria is an unparalleled crisis. Having gone far beyond the internal political struggle, the war is marked by a complex array of forces that the US Empire hopes to command: Saudi Arabia, Turkey, Kurdistan, Iran, Lebanon, Iraq and more.

To simplify this web of enemies and friends in the regional war, Abby Martin interviews . Vijay Prashad , professor of International Studies at Trinity College and author of several books including “The Poorer Nations”, “A People’s History of the Third World” and “Arab Spring, Libyan Winter”.

Journalist Eva Bartlett: “I’m Back From Syria The Media Is Lying To You!” lasts 36 minutes.