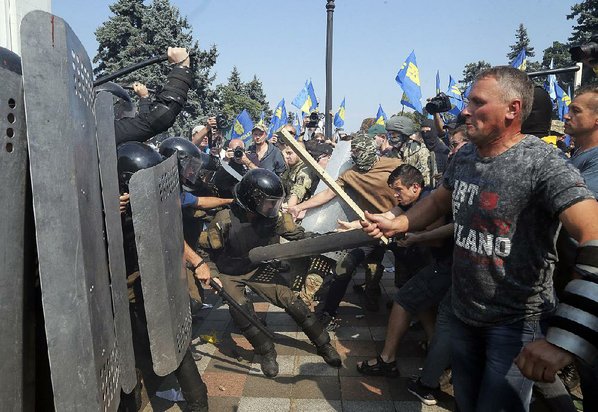 One Dead, 100 Injured in Kiev Clashes After Grenade Thrown at Police

East Ukraine rebels believe Ukraine’s new vague decentralization laws fall short of its obligations under Minsk II agreement
Even so the bills could only be pushed through under heavy western pressure
Others have critiqued the reform for actually centralizing power further
Prefects appointed by the president will have power to issue decrees, block local initiatives and dismiss local officials

Two more National Guardsmen have died from injuries suffered in the explosion
50 more remain in the hospital
National Guard is a paramilitary police subordinate to the Interior Ministry, it was established after Maidan and recruited from participants of the Maidan

Why Kiev Continues to Sacrifice Men in Strategically Useless Battles

You can’t make this stuff up. The New York Times again proves equal to the task – of showing how Ukraine far-right nationalists attacking police and leaving 3 dead and 100 injured is really Putin’s fault

Put yourself in the Russians’ position. US builds up its military presence in Ukraine – your most significant neigboring country, home to 5 million ethnic Russians – what do you do?

One can see the grenade starting at 2 seconds into the video. Actually it looks like two grenades went off, one in the open area, and another where the policemen are standing holding back the crowd.

More than 90 security officers were injured during the clashes, including one officer who lost both of his feet as a result of the blast, and two more officers who died the next day from the blast(s).

Kiev Riots Herald the Coming of More Chaos to Ukraine

Strikingly, President Poroshenko’s priority in his television address following the riots was not to condemn the violence but to appease the rioters and their supporters by assuring them that his decentralisation proposals are not for real

Some Eastern Ukrainians Are Still Forced to Live in Basements

Particularly in rebel-held cities near the line of control such as Donetsk, Gorlovka, Makeyevka, Lugansk

The bombings were urged and financially supported by Obama and Merkel. It will come back to haunt them

Highly unusual for US Department of Justice to be investigating a pro-western oligarch like Igor Kolomoisky
But apparently his PrivatBank hiding $1.8 billion of IMF funds was too much even for Washington
Now it appears, the bank had help from IMF officials who are running for cover and refusing to answer questions

In an interview with Sky News, Ukraine’s Petro Poroshenko accuses Russia of extending its “campaign of destabilisation”

Violence has again returned to the streets of Kiev – the internal contradictions of the Maidan coup are on view for all to see. Since the forced ouster of the previous elected government, Ukraine has been long on intolerance and short on compromise. What’s next for this divided country? CrossTalking with Dmitry Babich and Mark Sleboda.

A retired Irish diplomat makes the case that western anti-Russian sanctions should be dropped.

In early 2014 the right-wing nationalist Oleh Tyahnybok was perhaps the top political leader of Maidan
He was not as nationally prominent as the more mainstream Yatsenyuk and Klitshko
However, his Svoboda Party was the number one choice of the the right-wing street fighters who actually manned the Maidan barricades
His luck took a turn for the worse when few of his people managed to get elected in the 2014 parliamentary elections after the coup
One way to look at Monday’s clashes which left 3 police dead and over 100 injured is as the desperate attempt of this street-fighting right-winger to regain the national spotlight and prominence

Ceasefire announcement does not point to an end to the Ukrainian conflict but to a weak government, unable and unwilling to make peace,

New Violence in Kiev – But This Time Nobody Cares

Is the west tired of Ukraine and its problems? Peter Hitchens, prominent British conservative commentator thinks so

2500 servicemen participating, including 1,000 Americans and 1,000 Ukrainians

Poroshenko used to opportunity to complain IMF isn’t funneling money his way fast enough
Lagarde made no promises here, but seemed not to mind the idea Kiev defaults on its debt to Russia
She mingled with locally-stationed IMF officials implicated in the disappearance of $1.8 Bn

Ukraine Prepares to Default on Its Russian Loan

Ukraine’s failure to secure a bigger haircut on its private debt means that it now has no alternative but to default on its loan to Russia.

Outright Lies From The New York Times on Ukraine

The truth: Poroshenko is being lamely pressured to move towards peace which is in Ukraine’s best interest by Berlin and Paris and is opposed by fascists

NYT’s telling: Poroshenko is being blackmailed by Putin, which has infuriated Ukraine ‘nationalists’ who oppose concessions

Ukraine wants to sell 345 state-owned companies – but what outside investor will buy a company in a country where there is civil war?

Moreover Russian money is not welcome

Put yourself in the Russians’ position. US builds up its military presence in Ukraine – your most significant neigboring country, home to 5 million ethnic Russians – what do you do?